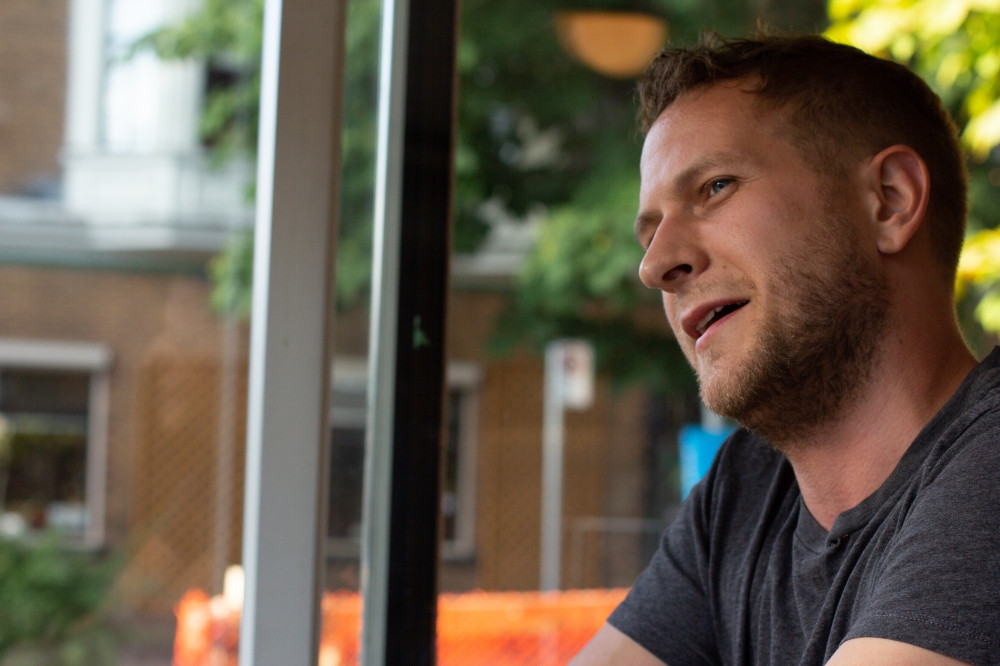 The following interview took place on August 30, 2018 at Moja Coffee on Commerical Drive in East Van between filmmaker Danny McCreery and me, Big City Art. Yes, Danny is my brother, and yes, I know he’s the good looking one! His upcoming screening of Sketchbook at the York Theatre is on September 20th at 7:30pm. Buy tickets here. Find him on Instagram here: @danbobpictures

When did you start making films and why?

I was twelve or thirteen. I picked up our video camera … and the video camera went through stages of not working, and then working and then not working … I remember [my sister] had done a little claymation thing with it and I just thought of doing something with my army men, [in the same way] – record stop, record stop – and that was the first thing I made – either that or a hot wheels car race.

… [And then] I just kept doing it … I could just do it in my room and not get bullied by [my brother] [laughs]. Just shut my door, move my cars, just zone out. I didn’t know it but it was my first meditation exercise.

It just kept progressing from there, I did a bunch of those, and started doing snowboarding videos with my [buddies]. Then videos with [my brother] snowboarding, compiling those together … getting really good at cutting action shots.

When I was doing the stop motion [I was] a huge film fan. That was around the time me and [my brother] got Star Wars on VHS. So, I connected it … It was never like “oh I was going to be a big filmmaker”. It was just something in my head that, people do this, and I can do it … [Me and] my buddies in high school did a lot of movies together. By the end of high school, [I felt like] there was nothing else for me to pursue.

What was the progression that got you to this point – the education and experience that gave you the skills you needed?

I took a year of general studies at Red Deer College. I tried to get into their film program but they only accepted theatre students that had gone through their program, or if you had a really good reel you could get in. But I was straight out of high school so I didn’t have a good enough film reel … Then I just tried to make little videos throughout the year. I made a video for [my brother] for his art program, [to document the process] of pour[ing] a bronze . It was just a fun year …

[A couple years later] I applied to Capilano [University], and I got in there, and did the one-year program in Motion Picture Production, which is really great, but at that point the biggest thing was money. In hindsight it wouldn’t have been amazing to finish film school either … I knew that I loved film still but I didn’t see necessarily how doing that program was going to work, because I would be so far behind [with money].

Then I went into exploration work – that was kind of the only thing I could do … But I didn’t get any further ahead. So I became even more depressed because [I felt] like, well, I didn’t keep going to school and now I haven’t made enough films and I’m still financially not there. But maybe that was what I needed – it pushed me to really hunker down. So after five years [working in mining exploration], I bit the bullet and went into debt again – paid for some of it myself – and took the Visual Effects course at VanArts for one year. 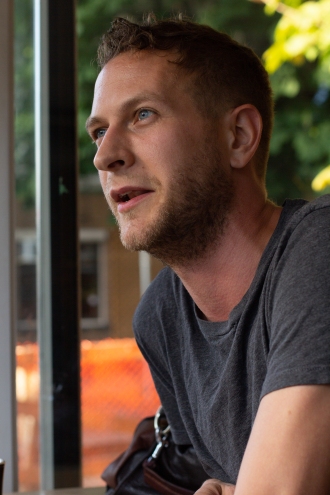 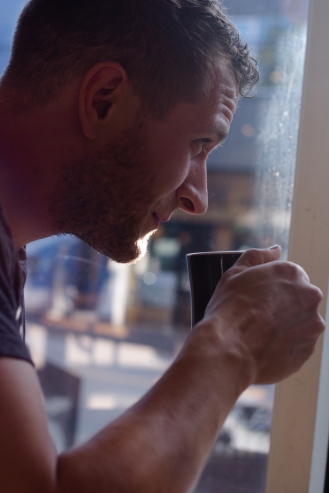 Tell me about the films you’ll be showing on September 20th. What do you want people to come away with after they watch this set of films?

I like the idea of having a variety of things … One of the main things I’m trying to show is something that is different than your average student film coming out of film school. [It] incorporates what I do and what I’ve experienced in my life and the visual effects that I can do … [In student films] you never see any action … it’s always drama, or comedy, or just heavy dialogue stuff. Which is understandable because that’s cheap to do. With these [films] … I’m trying to bridge that gap between what normal students do out of film school and what you can do with a higher budget. So, a few of [my films] have that aspect – some of them are just “get it done” … I wanted for this project to just go with a bunch of different ideas and throw some stuff at the wall, and … bring [my filmmaking craft] to a watchable level. Then for myself, I can be like “okay that idea wasn’t that great, that idea was better” and I can move forward with ideas that work better …

So it’s kind of a variety show from one person, which I haven’t seen before. Normally at a film festival you see a bunch of different short films from different people. But I thought [this] would be interesting, and I thought other people would find it interesting as well. And to show that people coming out of film school can do more than they think they can with a low budget …

I know that I can make something look photo real with my Visual Effects [skills], but it just takes a shitload of time, so I was also trying to bridge the gap between what I can accomplish all on my own for a longer film … This whole year project was to develop my own pipeline that works as well going forward. So I placed myself in a good spot to do the next one.

Could you give a quick description of what a pipeline is?

The beginning of the pipe is your script or your idea and the end of the pipe is your editing and your export. In between that is story boarding, development, pre-production, location scouting, production – all those little steps. Then visual effects once you’re done filming – editing, exports … So that’s a pipeline. Then you have separate pipelines within each of those things. So visual effects has their own pipeline, which is modelling, animating, rendering, lighting, compositing, review. Then that gets sent to the editor, then they send it back, or not. So there’s sort of separate offshoot pipes for each one.

So you’re doing all parts of that pipeline for these films.

I’m doing everything … I’m trying to develop an efficient way for me to work, for me to make my own pipeline. I know how a visual effects pipeline works but I don’t want to just make visual effects shots … I’m incorporating the visual effects part – at least I know I can do that well. But now the audio – I’m trying to get that up to the same quality, and then all the other stuff as well. I want to be able to do a movie on my own, and not have to rely on anyone else to make a movie that looks high budget but isn’t.

It was really interesting to hear you talk about all the different parts of the pipeline, because when I see a movie, I don’t think about that. All I think about is: “How does this compare to Hollywood movies I’ve seen that cost millions of dollars to make?”

For big movies you have a specialist for every single one of those steps … So it’s amazing in that sense, you can really get a cool movie. When I do get a really big budget movie, which is the plan, I want to be able to say I can problem solve and do all those things, so I can communicate to people more effectively and be more confident about my skills in it. Otherwise I’d feel like a phoney, or that I might have just accidentally stumbled upon a good idea, and written a good script, and got it funded, and I actually don’t know what I’m doing as a director or filmmaker. I’d rather be on the other end – struggling with the ideas, getting better and better at my craft, and eventually getting to be good … One of my ideas eventually will hit and be good and I can make that myself and make it good. Or when something gets funded I can back it up with the films I’ve made, and be like “this is what I’ve done”. In a practical sense I know what I’m doing. I can nail a mood or a tone.

Can you give me a one-sentence description of two or three of the films, just to give people a taste of what it’s going to be like?

“Stuntman” is an action comedy about a stuntman trying to impress a friend and never quite succeeding at it. “Empty” is a film about a sock puppet struggling through a mundane day. “The Collector” is a film about a debt collector with too much enthusiasm.

How long does the whole series run?

The whole thing altogether, should be about 55 minutes.

So it’s playing on September 20th, at the York Theatre

Two steps from your home.

Yup [laughs] Roll out of bed.

Tell me about the thing that inspires you the most about your potential for making film. What’s exciting for you when you look forward to making films?

… Mostly what excites me [are] the sequences in my head, that I want to film. It’s always the next thing … My goal in 10 years is to be in a good enough place filmmaking that I could make this fantasy movie that I’ve wanted to make. It’s a film I’ve had since I started doing those stop motion [films] that I’ve built on in my head, scene by scene. It’s the main one I’m holding up to try to finish and get good. I kind of don’t ever want to make it ‘cause then it can never be bad though [laughs]. Because I don’t know what I would do if it didn’t end up good. That’s one of the main driving forces of why I want to become a professional filmmaker because I want that film to look good.

So there’s a holy grail.

Yeah, I’ve got this idea and visual goal for myself and until I get there I can’t make that movie. So that excites me right now. Once I get there, and I make it, I don’t know if I’ll be a filmmaker anymore! [I’m just trying to] enjoy the process in between.

Proceeds from the screening at The York Theatre will be donated to the Canadian Mental Health Association.