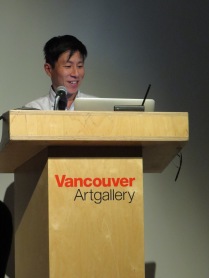 Heading downtown to the Vancouver Art Gallery on a Tuesday evening after work would have been worth it just to discover what the Kowloon Walled City was. But I didn’t know it was the inspiration behind Howie Tsui‘s animated piece, Retainers of Anarchy when I went to hear him speak that night. I went because his piece touched me. It touched me in a way I couldn’t explain and I wanted to put my finger on what it was. I was hoping the artist could shed some light on why I had felt compelled to visit the Vancouver Art Gallery four times to see his show and each time found myself seated in front of his surreal animated rendition of the Kowloon Walled City.

Although, as I suspected, Tsui could not read my mind and my heart to guess what had spoken to me about his work, his talk did not disappoint. He didn’t shy away from what had made him the artist he is today. He delved into his childhood, moving from Hong Kong to Thunder Bay, Ontario, the isolation as an immigrant family and the odd combination of influences from back home and in the Western world.

He showed art that had marked milestones in his evolution as an artist. Perhaps my favourite was the Celestials of Saltwater City.

He spoke candidly about feeling out of place in the sometimes sterile and impersonal art world he discovered after leaving Thunder Bay to pursue his education in art. He felt the art he was seeing wasn’t “made of flesh” so-to-speak. But he found some of what he was looking for in the outsider, disobedient street art, of magazines like Juxtapoz and Giant Robot.

After Tsui’s talk, I almost unconsciously found myself, once more, in front of his animation. Again I saw a different part of the film than I had before, this section depicting a man in an overturned cage on wheels, a plate of food within inches of his mouth as he struggled to reach it. The scene is heart-wrenching, but it’s most definitely not cold or impersonal, and perhaps that’s why I love it so much. The world he depicts is one I am completely unfamiliar with and in a place I have never visited, nevertheless, it speaks across languages and skin colour to the heart of the human experience. This is what good art is to me, and this is why I can’t get enough of Howie Tsui’s Retainers of Anarchy.