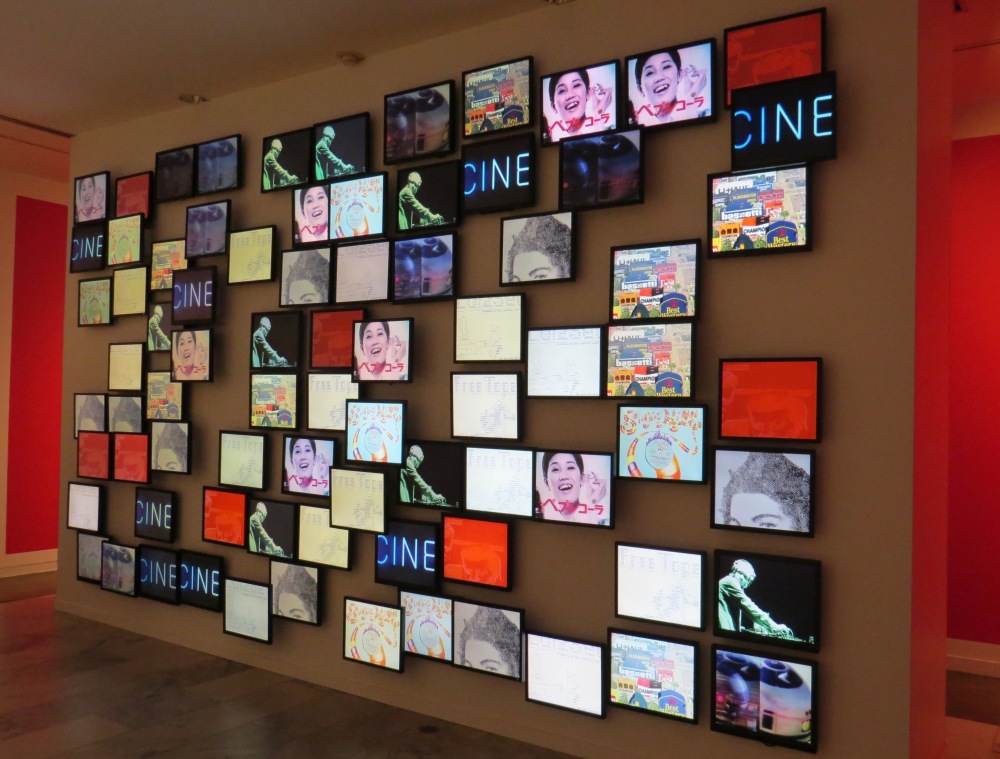 The complimentary tickets to the Vancouver Art Gallery have been sitting in a cup on my desk for months now. It’s not that I haven’t wanted to go; it’s finding the time. It couldn’t be just anyone I went with, it had to be my son. That was the intent behind the gift. My coworker’s other job is at the Vancouver Art Gallery so I get to hear about behind the scenes happenings and progress on new shows. When you work with people they usually end up knowing a lot about you. That’s why Dwight knew that my son has been struggling with school and with making friends in this new city environment. One day he showed up with two complimentary tickets to the VAG so my son and I could do something together. 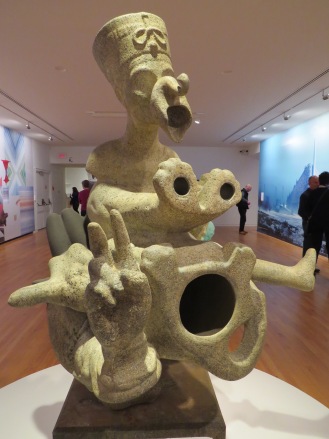 It was after hearing all the hype about MashUp that I knew it had to be this show that I took my son to. It was the biggest show yet at the VAG, covering all four floors; MashUp: The Birth of Modern Culture. This was my chance to jump into modern art with both feet. My coworker is always surreptitiously trying to teach me about modern art, and razzing me about what I learned in Art History in University. Can I help it if I’m too much of a hillbilly to get modern art? And that I graduated 10 years ago and have lost most of the details of those four years? I’m taking no responsibility for for my lack of knowledge. But the fact remains that if I’m to break into the art scene in the city, I have to at least give modern art a shot. No, I don’t have to get it, but I do want to at least try. 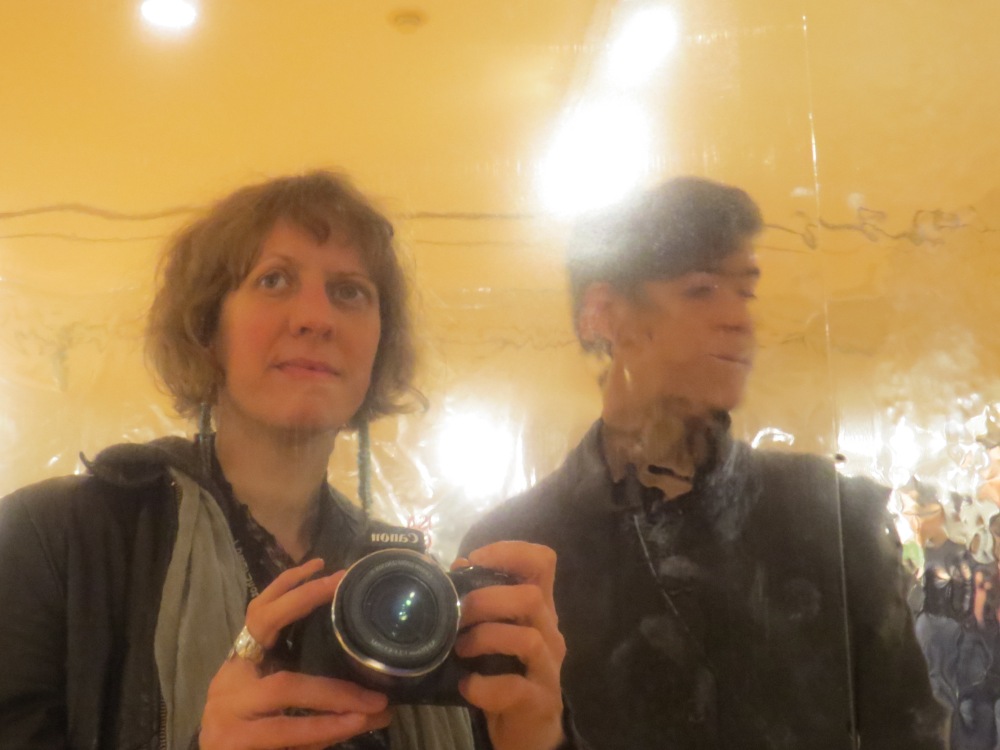 So on a blustery Sunday afternoon my son and I jumped on the bus, then the skytrain and walked through the rain to the Vancouver Art Gallery. My son for the first time, me for the second. It feels like a big deal to go to the VAG. We walked past the huge facade of the building with the lion sentinels guarding the high steps. My son noted that it would be far more impressive if we could actually enter into the Gallery through the giant facade. But instead we curved around the side of the building, scurried in the doors and shook off the umbrella in the warm lobby. It was impressive enough. Line up, tickets, coat check, and we were in the rotunda enjoying the rabbit hole experience of being surrounded by words printed in black on white walls, emoticon inspired faces and the impressive spiral staircase winding up to the second level.

On level one, we were greeted on the right by a wall of flashing screens; Andy Warhol pop culture images and other media snippets, flash across multiple screens in a strange kind of dance. This level is called: The Digital Age: Hacking, Remix and the Archive in the Age of Post-Production. We found rooms with headsets playing mixed music, walls that warped your reflection and a mechanical DJ setup.

Level two is, Late 20th Century: Splicing, Sampling and the Street in the Age of Appropriation. My coworker made sure to tell me to show my son Logorama. Of course, I forgot but luckily you can find the video online.  I tried to observe the signs that indicated no pictures allowed. But when I spotted a Jean-Michel Basquiat, I thought maybe, just maybe I could take a picture of the label so I could track down the image later. No can do! Those security guards are on it. I obligingly deleted the photo and thanked the nice lady for clarifying. My son was excited to find a technique he was familiar with: Pointillism.

On level three, The Post-War: Cut, Copy and Quotation in the Age of Mass Media, I enjoyed seeing Andy Warhol‘s Marilyn Monroes and the less well-known, electric chair series. 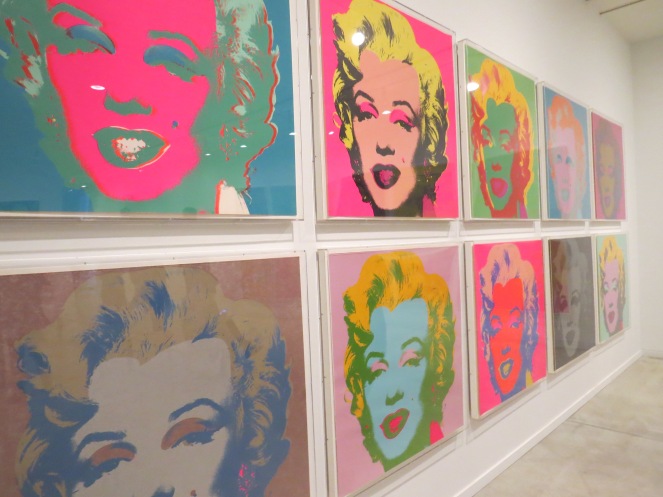 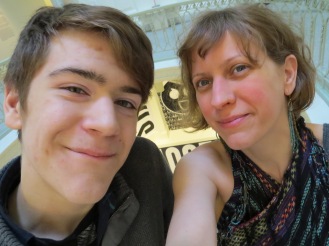 On level four, Early 20th Century: Collage, Montage and Readymade at the Birth of Modern Culture, you can find a couple of little Picassos. Looking on the VAG website later on I realized how many great artists I had walked right by without noticing. Four levels is a lot to absorb, especially of modern art. My small-town brain was exploding, and partway through our visit I realized that my son’s was as well.

There is a strong correlation between how that visit to the VAG felt and how my son and I have felt moving to the city. You don’t really realize how different something is until you immerse yourself in it. You don’t realize how little you know about something until you’re surrounded by it and having to learn how to navigate a new context with your old skills; skills you developed for survival in a different environment.

The afternoon ended with a cup of coffee in the second floor coffee shop of the gallery. I felt truly city, ordering my almond milk latte and looking around for a seat at the little tables and comfy nooks looking out onto the balcony. The last thing I expected was to find a little piece of home, but as I waited in line for my coffee I felt a tap on my shoulder and turned around to a huge hug from my cousin, on her way back from Mexico. Suddenly the vastness and strangeness of the city melted away and I settled into a good ol’, small town conversation about connection and possibilities.

By the time we made it home my son and I had wet feet and cold hands, but the adventure had been well worth it. From modern art to reconnecting to my roots, it had been a proper adventure of a day.