Finding a date to an event in the city is as hard as … well, it’s as hard as finding an alcoholic drink at the Vancouver Art Gallery. And I should know; I spent the better part of a week on Tinder and the better part of an evening at the VAG discovering just that. In the end I turned to family to solve the date problem and my little brother agreed to come. I thought it was because I had promised him that there were always cute girls and free drinks at these things, but as it turns out, he just felt sorry for me. His last date, it seems, had gone quite well. So he hung out with me instead of her and that earns him serious sibling points in my books. But I still had to deliver on the drinks. 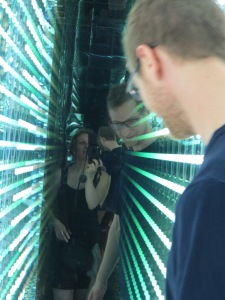 I met him at the doors of the Vancouver Art Gallery for my first FUSE event. I had no idea what to expect but I was ready for anything. Perhaps a little nervous – would there be interpretive dancers? – but ready for anything. The line was long, and there was excitement in the air. A party in the city; what could be better? The thing I like about Vancouver is that you can dress to the nines (which many people had) or you can wear your jeans (as many others had) and no one cares. It was a great cross section of Vancouver I think; mostly artsy types but I could tell this was a fun night out for anyone – great date night idea if you ask me, but I’m no expert. 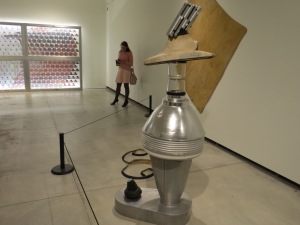 I can’t remember the last time I enjoyed exploring art so much as that night. The gallery is designed with several floors and a rotunda in the centre that drops all the way through the middle of each floor. Floor one exhibits the Group of Seven and related paintings along with models, plans and videos of the proposed new gallery and its location (tres exciting!). This is the only floor where no pictures are allowed as I was pleased to find out (a blog’s not much of a blog without pictures).

Up on floor number two we discover a feature exhibit by Lee Bul, which I suddenly remember I’ve been wanting to see since my coworker told me all about it and showed me her work. I.N.C.R.E.D.I.B.L.E. is all I can say. This is a must see and at the very least you should google her work. Her pieces were explorative, interactive, thought provoking, entertaining and at times disturbing. Just what I expect out of the very best of modern art. Throughout our exploration of each floor we came across performances, both musical and artistic, adding so much richness to the experience. The only thing missing was a glass of white wine, or maybe a Guinness … anything would do; but our drinks remained elusive.

The fourth floor was a wash of beauty and power as we rose up the escalator. This is where the First Nations art is housed. My brother noticed the name Ken Mowatt and recognized him from our home town of Hazelton. There were Robert Davidson pieces and other artists’ masks all lined up along the wall in a stunning display. That was probably my favourite floor. I think it was the art, but it also may have been that the disco beats and lights were louder the further up we went. My brother and I concurred that we must be getting close to the alcohol.

As we finally reached the party we walked in expectantly. There were three projector screens with video footage of a masked dancer on the sidewalk of a street (Granville was it?) doing something like interpretive dance but not enough like it to freak me out. I actually quite enjoyed it. There was a certain rhythm and joy in the woman’s movements and watching the varied reactions of passersby was perhaps the most interesting of all. Some looked at her oddly, others joined her in her dance and most just walked on by. And it was also enjoyable because, we were very, very close to a drink, I could feel it.

DJ music was playing on what I guess would have been the rooftop or patio had it not been tented in. It was a fun atmosphere with round tables scattered around the room and city folk laughing and chatting. We had completed our pilgrimage to the top of the building but alas, there was no reward for us poor souls. So, we headed down the three stories to the street outside where the Vancouver sky was spraying a fine mist over us as we held our hoods and scarves over our heads and laughed our way to a pub for a couple of Guinness. Perhaps there was no alcohol to be found at the VAG, but, as I’ve discovered, Vancouver has a pub on every corner. What started as a one stop destination turned into a bit of an adventure and even a little high brow art talk for a couple of hillbilly kids from the North. And the adventure was not found lacking. 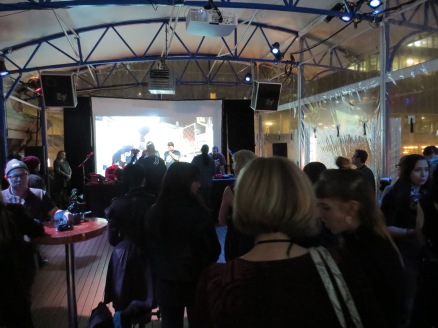